Brief History: St. John Paul II Parish, Baijalbari, has a large number of Debbarma families and some of Adivasi tribe. From 1982, the Holy Cross Fathers started contacting the people of Khowai Region. In 1991, twenty acres of land was donated to Don Bosco Society. In 2008 when the Parish of Mandwi was opened and placed under the care of the Salesians, the area of Baijalbari-Khowai region, formed part of the new Parish of Mandwi. In 2009, Fr. Thomas Lakra, S.D.B., opened a School and Hostel for Boys and Girls at Baijalbari. In 2010 Fr. Paul Panachikal, S.D.B., was sent to be in-charge of Baijalbari Centre. There was a small shed with a tin roof, which became the residence of the Priest. Later on 24th January 2013, Fr Juel Ekka, S.D.B., took charge of the School as Headmaster. The first group of S.C.V. (Sisters of Charity of St. Vincent de Paul) reached Baijallbari on 10th April, 2013. St Vincent de Paul Convent was thus established and inaugurated on 8th June 2013 by Bishop Lumen Monteiro, C.S.C., in the presence of Fr. George Maliekal, S.D.B., the then Provincial.

Since the beginning Bishop Lumen Monteiro was asking the S.D.B. Fathers to start a Parish at Baijalbari. The Provincial Council officially requested the Rector Major for permission. Rev. Fr. Pascual Chavez, S.D.B., the then Rector Major, granted permission on November 2013. St. John Paul II was chosen as the patron of the Parish. The new Parish was officially inaugurated on 27th April, 2014 by Most Rev. Lumen Monteiro, C.S.C., on the very day of the canonization of John Paul II in Rome. Fr. Paul Panachikkal, S.D.B. was appointed as the first Parish Priest and Fr. Juel Ekka, S.D.B., as the first Assistant Parish Priest. 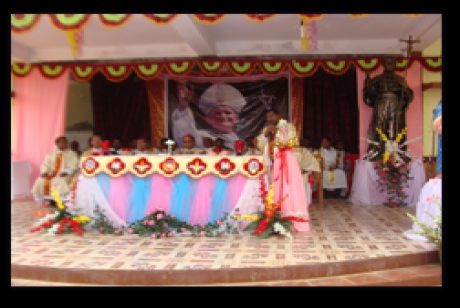